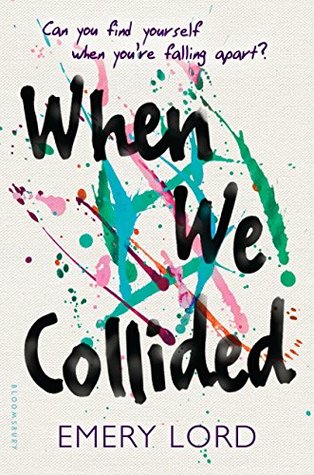 Seventeen year-old Jonah Daniels has lived in Verona Cove, California, his whole life, and only one thing has ever changed: his father used to be alive, and now he is not. With a mother lost in a deep bout of depression, Jonah and his five siblings struggle to keep up their home and the restaurant their dad left behind. But at the start of summer, a second change rolls in: Vivi Alexander, the new girl in town.

Vivi is in love with life. Charming and unfiltered, she refuses to be held down by the medicine she’s told should make her feel better. After meeting Jonah, she slides into the Daniels’ household seamlessly, winning over each sibling with her imagination and gameness. But it’s not long before Vivi’s zest for life begins to falter. Soon her adventurousness becomes all-out danger-seeking.

Through each high and low, Vivi and Jonah’s love is put to the test . . . but what happens when love simply isn’t enough? (via Goodreads)

Title: When We Collided

Review: I’ve been itching to get my hands on another Emery Lord book since I read The Start of Me and You and loved it.

The writing in When We Collided was very breezy, despite dealing with some darker subjects. I was able to fly through the pages. I really like that each of the main characters had their own demons that weren’t “fixable” by each other’s love.

You’re introduced to Jonah’s demons pretty early on, but it took a little while to get to Vivi’s. I liked that because I kept the story interesting, but I also had me waiting for her to “break” which I didn’t really like, but it was an unavoidable feeling.

I found Vivi to be annoying at times, which I felt like was intentional. I think she tried too hard to live like an enigma. My heart broke when she would have conversations with her mom about her medicine. You could tell that her mom was just trying to care about her.

I found Jonah’s family life to be very relatable, and the most realistic part of the story for me.

There were times, though, where the characters did feel a little flat to me. And by the end of the book, I felt like I was ready for it to be over. It was definitely an emotional read.

All in all, I enjoyed the story. I think YA needs more books that accurately tell a story of mental illness.

5 thoughts on “Book Review | When We Collided by Emery Lord”

Hello and welcome to my blog! My name is Emily and I’m just a girl with a love for books. Here you’ll find all types of book related posts.